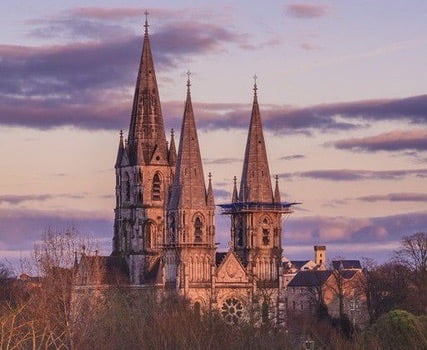 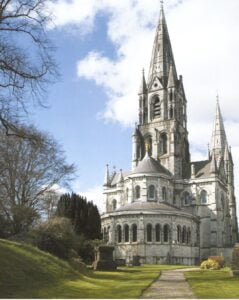 For decades I have slogged on with a freelance music career, through highs and lows, never thinking for a moment that anyone noticed. But clearly they did! The evidence? A second invitation (within two months) to accept an honorary fellowship in recognition of my track record in church music – this time from the Guild of Musicians and Singers!

The first one from the Guild of Church Musicians (see September blog) put me in the illustrious company of senior Cathedral musicians, Professors and Composers like John Rutter and Howard Goodall.  Now I also join the ranks of  Sir Mark Elder, Vassily Petrenko, Dame Patricia Routledge and the late Dame Vera Lynn. 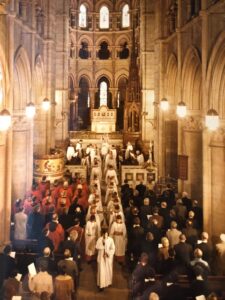 What I value most is the specific mention of my work in Ireland at St Fin Barre’s Cathedral, Cork. Apart from ex-choristers, with whom I’m in contact through social media, I assumed my six years of blood, sweat and tears was long forgotten. When I revisited during the summer of 2012, memories seemed like pale ghosts.

It was the stuff of pioneers when I arrived Easter 1978, aged 26, to claim residence in the organist’s house recently vacated by the legendary Jock Horne – who had retired after 56 years loyal service. My brief was to ‘regenerate the choral tradition’.

I inherited a choir of mixed elderly adults and one boy chorister. There was no assistant organist or organ scholar. The protestant population in Cork was about three per cent. Choral Evensong had virtually fallen by the wayside.  Was I mad, my wife and friends asked?  No – but young, energetic, enthusiastic and optimistic.

It was a desperately hard slog, and there were issues about conducting. I have a passion for psalm singing: that the words must be clear, brought alive with drama and reverence in a prayerful spirit. The best way to inculcate this was to conduct the embryo choir unaccompanied. Members of the congregation complained they were seeing too much of me (not the prettiest sight) and conducting was banned. It took several months and many sleepless nights but eventually a visit to the Bishop’s Palace with the Dean achieved resolution. A bit hazy now, but I remember that a rapidly diminishing bottle of sherry was key to a breakthrough. Classic copy for Anthony Trollope!

The first summer, we took the choir of 20 boys and 8 men over to sing services in Gloucester and Worcester Cathedrals where they acquitted themselves respectably.  After that, word was out in Cork and more choristers came. My work with the newly formed North Monastery Boys Choir at the Catholic Christian Brothers school encouraged some Catholics to join. Over the six years we ‘grew’ more men.

Choral Evensong became very popular, particularly among the parents of choristers and the ex-pat community. I made a vinyl record of organ music on that great instrument in the days before much editing was possible. Cork airport agreed to divert flights away from the Cathedral! Later we made a commercial recording of the choir.

Key to all this was the appointment (after much debate about the necessity) of a talented assistant organist in the shape of Colin Nicholls MA, FRCO (CHM). Colin stepped into my shoes when I moved on to Belfast, faithfully consolidating the early beginnings and moving things on over the next 26 years.

It is a great delight to me to enjoy the high standards now emanating from St. Fin Barre’s.

Thank you to the Guild of Musicians and Singers for bestowing on me this honour.